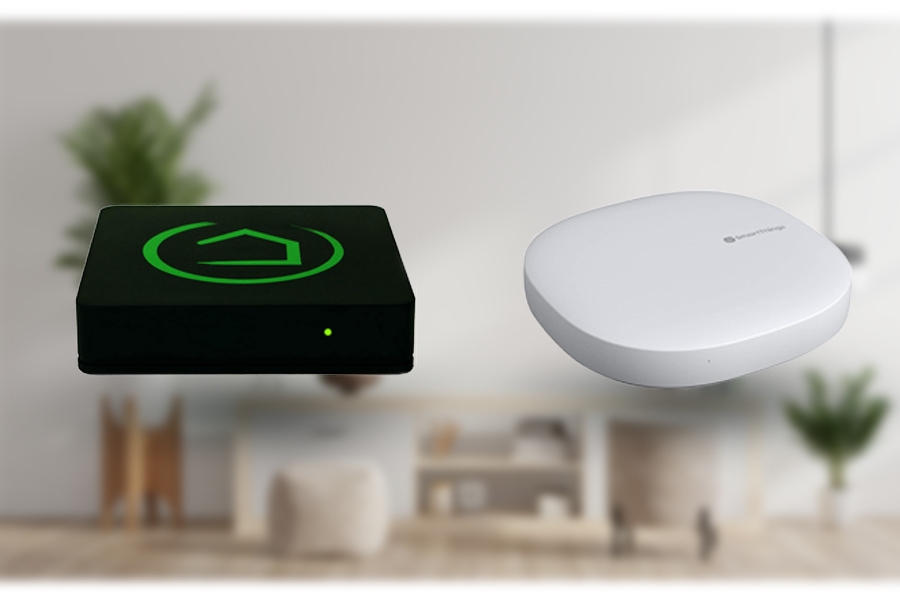 Are you confused about choosing a Smart Home Hub? Keep reading this guide on Hubitat vs SmartThings to get your answers and make an informed decision with us!

All devices have different attributes; hence they use different technologies such as Zigbee, Z-Wave, WiFi, Bluetooth, etc., to communicate.

Therefore, to control them together with a single-user app, you will require a hub. Now that’s where Hubitat vs SmartThings smart home hub play the role.

Though both the smart home hubs have perks of their own, it can still be daunting to choose between them.

You might question the advantage of both and which one would be much compatible with your setup.

As both the technologies are highly advanced and efficient in their ranks, people often get stuck while choosing between Hubitat Elevation Hub and SmartThings WiFi Hub.

Having tested and observed both the technologies closely, we have decided to share our review and thoughts with our readers.

So, if you are stuck too and want to explore these two technologies before making a buying decision, you should give this article a thorough read.

This article compared- Hubitat vs SmartThings to give a clearer idea of which device best suits your requirements.

What is Hubitat Elevation Hub?

Hubitat is a local-based smart home automation hub that can be accessed without any internet. It is a quite compact device connecting directly to the router with the ethernet cable.

Hubitat does not depend on a cloud-based service that provides the best for privacy in a smart hub. Hubitat smart automation hub provides 100% local solutions.

This implies that once you create an account, the entire processing is performed locally on a home network. So Hubitat is amazing DIY home automation.

Some of the most compatible brands with Hubitat are:

What is SmartThings WiFi Hub?

The major benefit of this device is it features an integration of the hub with a voice assistant, mainly Amazon’s Alexa and Google Home Assistant.

SmartThings is a smart device that enables you to control the activities in your smart home and allows you to control devices via a mobile app remotely. SmartThings, as people are aware, is completely owned by Samsung.

Some of the most compatible brands with SmartThings are:

1. Availability in The Market

The availability of a product in that market is the major point to look for before you decide to purchase a device.

But, simultaneously, you might also want to be aware of how long that product was made available.

On the related subject, SmartThings has been on the market for a while now. So we researched various websites and mainly Samsung SmartThings’s website to get into the history of devices history.

Knowing about the origin and its establishment made it easier for us to understand its compatibility with other products on the market.

Contrary to that, the Hubitat hub is a fairly recent device. Over the period by reading the market and testing the devices, we observed that the product had gained great fame in the market in a notably short period.

Hubitat is compared with SmartThings mainly because of its potential to adapt since it’s a DIY home automation device.

Yet another very crucial aspect while picking devices is their ease of use in practical daily life. For some, it is an important consideration in a product, while for others, it is completely negligible.

Besides, setting up SmartThings is not that complex. If anything, it’s quite simple. You are provided with full control over all the connected devices through the smartphone app.

On the other hand, Hubitat is quite similar. It does not support as many devices as SmartThings, but it is still pretty simple and easy to operate.

Same as SmartThings, you can control all your smart home devices through a similar app.

Being the latest device, Hubitat offers great compatibility with an extensive range of smart devices.

Comparatively, SmartThings does have a significant edge in this respect. Hence, the difference is very minimal to be considered.

Both the hubs are completely compatible with voice assistants such as Alexa and Google Assistant. This implies that both the technologies can be controlled via voice commands without any hassles.

While comparing both the hubs, we found out that Hubitat has a big selling by which it has been able to leave its contenders behind. The selling point of any device marks its ability to generate more advanced home automation systems.

We are grateful for the Rule machine app, which allows creating a wide range of routines and commands for the hub to perform for you.

Similarly, SmartThings does have a plus point as compared to Hubitat while setting up. The reason for this is that SmartThings can be connected with both WiFi and ethernet.

This can be of great significance for most people, as some people like to go for wireless ones. Inopportunely, Hubitat only has ethernet during installation.

Before any verdicts on the two successful technologies, the final aspect we would like to put forward is the pricing scenarios for both.

Firstly, these hubs come with distinct options. But mainly, Samsung SmartThings again has an edge here, as it costs fairly less than Hubitat. But then you must consider that Hubitat features better home automation options.

The Rule Machine app offers you to set several routines or commands to the hub for executing, which will be otherwise addressed as Rule, Trigger, Triggered Rule, or Actions.

For example, while you lock the door or turn off the thermostat. Trigger refers to a rationally basic home automation function that carries on a precise movement during a specific occasion. You can use Rules in one or many triggers.

The configuration and guideline parameters are presented inside the user interface below the unique cause when a Rule becomes a part of a Trigger. You will be required to set codes for every trigger or rule you want to perform in simple words.

Although, you have to maintain and code every device all by yourself. Additionally, Hubitat doesn’t have a mobile app, so you will need to open it through the browser to control and monitor them.

For instance, if you wish to open the smart curtains for every room open at 45% separately with different timing. You set this with the Rule machine and install codes, and it will open at 45% within the time you set it in a code.

Moreover, you can set a Rule using codes for the lights to turn on once you enter a room with motion sensors.

The Rule Machine is an extremely good home automation engine. It enables you to create more intricate tasks. But if you want to keep it easy, then SmartThings is an appropriate choice.

Following are steps you can connect SmartThings WiFi to the modem:

If you cherish your devices and want to advance your smart home system with modern smart devices, we recommend the Hubitat Elevation Hub.

Hubitat is perfect for those who own a large number of cameras, motion sensors, lights, smart locks, and more in your entire apartment, and you wish to connect them in a way to function together innovatively.

Moreover, Hubitat can jog great domestically, too, so that you don’t have to rely on the network connection.

But if you still wish to keep things simple and enjoy the idea of installing your smart hub within the connectivity of the WiFi range, then we would recommend you to go for SmartThings.

If we are to give our honest and unbiased opinion, if you don’t plan on a steeper knowledge curve, you should opt for SmartThings.

Hubitat vs SmartThings: Which One Should You Pick?

While Hubitat works completely local, in contrast to Samsung SmartThings hub which works on cloud services, it depends on your requirements and use.

If you are among those who enjoy decorating their room with modern devices and smart gadgets, we recommend you go with Hubitat Elevation. It is an efficient choice as it provides you much more complex options for home automation.

On the contrary, if you wish to keep things low-key, your pick should be the Samsung SmartThings hub. It is highly convenient for those who want to place their smart hub anywhere around the house within the range of WiFi.

Both the hubs have their distinct benefits. For example, if you want a hub that enables complex integrations, then it Hubitat, but only possesses only a few smart home devices and runs under a tight budget, then you should go for Samsung SmartThings hub.

Both Hubitat and SmartThings can be efficiently integrated with Amazon Alexa, Google Assistant, IFTTT, and Lutron Caseta but not with Apple’s HomeKit. These virtual assistants will enable you to use your voice commands to control and manage your smart home.

Moreover, both the devices are compatible with Z-Wave and Zigbee protocols (mainly with Zigbee) to connect smart home devices.

Do you need a hub to use SmartThings?

SmartThings is a hub itself that can be used for home automation systems. It is also compatible with Amazon Alexa and Google Home Assistant.

Does Hubitat work with SmartThings?

The devices connected to SmartThings can convey to the Hubitat through some apps. The apps are built-in, known as Hub Link in Hubitat. Send Hub Events is an installable app within SmartThings.

Is Hubitat a secured device?

Yes. Hubitat is a properly secured device because all the data is locally stored and does not depend on cloud-based services. You will need not be concerned about the privacy of your data locally with Hubitat.

Has SmartThings been discontinued?

No. Hubitat was designed to integrate devices operating on Zigbee and Z-wave protocols for communication and have not been made compatible with WiFi devices.

Does Hubitat work with Alexa?

Yes. Hubitat works with Amazon’s voice assistant Alexa, enabling you to control your smart system with your voice command without making any extra effort. Not only does it support Alexa, but it also integrates great with Google voice assistant.

We hope that with this Hubitat vs SmartThings guide, you can make an informed decision for your smart home!