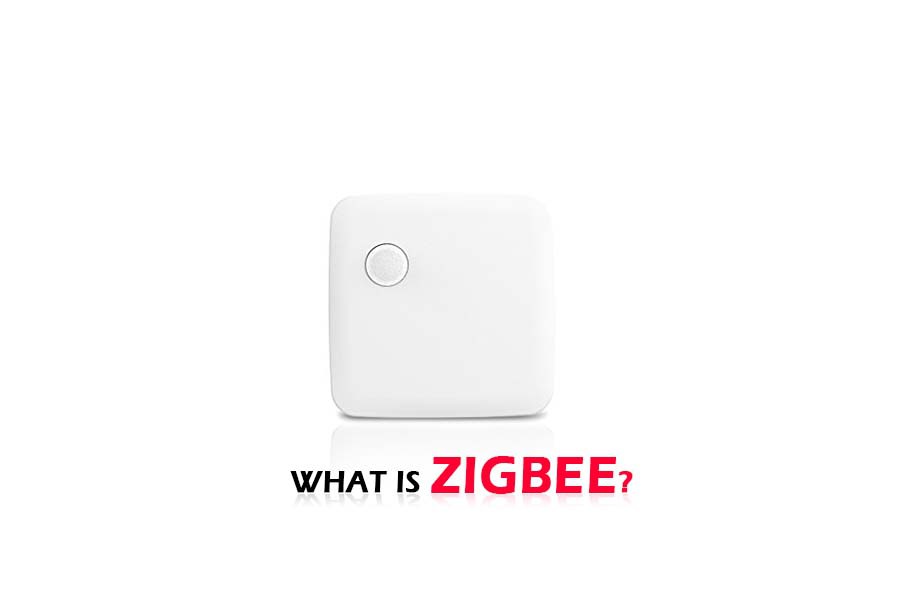 If you are wondering about what is Zigbee, you are at the right place. ZigBee technology is a wireless protocol established in 2006 as an open global standard.

It was developed for addressing the diverse needs of cost-efficient, low-power IoT networks. The wireless Zigbee protocol runs on the IEEE 802.15.4 radio specification and operates in unlicensed bands, including 900 MHz, 868 MHz, and 2.4 MHz.

In 2003, Zigbee got its approval from the Institute of Electrical and Electronics Engineers (IEEE) on its specification standard. The specification is a radio protocol that is packet-based for low-cost and battery-powered devices.

Now, since you have a basic idea of What is Zigbee here are some popular features of the Zigbee products.

Main features of the Zigbee protocol

How Does ZigBee Work?

Zigbee runs via a coordinator which is placed at the base of the Zigbee network. It sends messages to a router that passes it to an end device with specific instructions to run a task.

A standard Zigbee technology consists of three types of operating devices. These are the coordinator, router, and end device.

They work to send messages and directions from the central coordinator to the individual end device, such as a light bulb.

Which Devices can be Used with ZigBee?

Zigbee creators developed the Zigbee Alliance in the year 2002. The alliance industry includes member companies that sign up to use the protocol.

Currently, there are more than 400 member companies signed up, increasing the device count up to 2,500.

Here are some devices that are compatible with the ZigBee protocol:

To control all the devices, you will need a central hub instead of setting up every Zigbee device individually.

How to connect Alexa to ZigBee devices?

After this point, you can now operate your Zigbee device via Alexa.

How many nodes, or devices, can a Zigbee network support?

The addressing scheme of Zigbee supports hundreds of nodes as per network. Therefore, numerous network coordinators can be connected for enabling support to the extensively large networks.

However, an appropriate size of Zigbee Network eventually depends on what frequency band is chosen, how the system can bear much more loss of data or retransmissions, and how does it take for a device on a network to communicate.

What are ZigBee and its frequency?

Zigbee operates on the global standard of the 2.4 GHz ISM frequency band. Because of its international standard of Zigbee, it enables the hardware to be operated in any country.

What is the range of ZigBee, and how can you extend it?

The range distance of transmitting data is from 10 to 100 m, depending on the environmental conditions and power output. Even the sub-GHz channel range of transmission goes up to 1 km.

To extend this range per your convenience, you can add more routers between the problematic device and the very next router.

Moreover, the Zigbee mesh network enables each router to extend the range. Thus, almost every device powered permanently acts as a router.

Do Zigbee devices act as repeaters?

In Zigbee home automation, up to 15 hops are allowed into the hub out of 30 hops to convey a single message.

So, while an individual hope is shorter, the total area covered is quite large with Zigbee.

Check out our article on Zigbee vs. Z-Wave vs. WiFi for a detailed analysis.

What is ZigBee Coordinator?

The coordinator consists of all information about the network and functions as a Trust Centre and repository for the security keys.

What is ZigBee Router?

A Zigbee router is used to direct the data from various devices to reach the final destination. It also enables running an application function.

An end device consists of the appropriate functionality to communicate with the coordinator or the router. It cannot rely on the data from other devices.

Due to this, the node will keep asleep for a noticeable duration, enhancing the battery life to last long.

As a result, a Zigbee end device needs less energy to run than a Zigbee Coordinator or Zigbee Router.

Does Zigbee interfere with WiFi?

When you run a WiFi network and a Zigbee network on a similar frequency, they will interfere with each other. So, generally, the Zigbee network gets hindered.

Since Zigbee runs on 2.4 GHz, unlike WiFi which runs on 5 GHz, which causes interference between them, WiFi potentially upgrades the stability of the hue staff.

Check out our article on Zigbee vs. Z-Wave vs. WiFi for a detailed analysis.

What brands does ZigBee support?

Samsung, OSRAM, Belkin, Sonos, Phillips and on, are some of the very popular brands in home automation that have a range of products supporting the ZigBee protocol.

Where to Buy ZigBee?

You can buy Zigbee devices online, mainly from Amazon, as they offer huge discounts.

They have a wide range of compatible devices and hubs to pair with Zigbee. Check out the devices mentioned above!