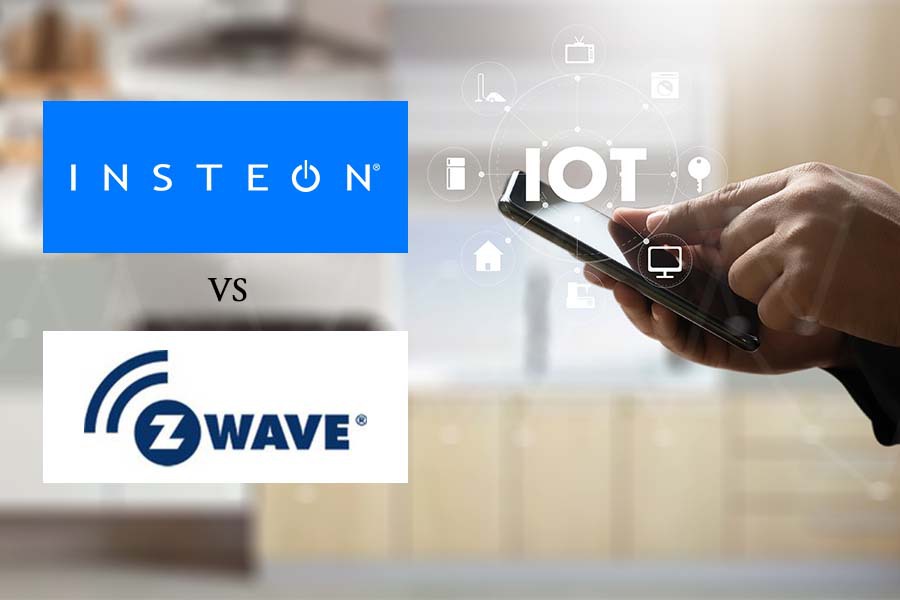 The home automation industry has been sprucing up two of its most popular wireless protocols, Z-Wave vs Insteon, that work on mesh networking.

Although some of the characteristics might be the same yet some features, specifications, pros, and cons are quite different in both technologies.

For people interested in efficient home automation, this comparative guide is the key to their queries.

We have an in-depth analysis of the aspects in which these protocols differ to help see which of the two gels best with your requirements and assist you well in home automation.

The following article will take a walk-through of Z-Wave vs Insteon with all the key differential points.

Z-Wave is a wireless protocol developed by a Danish company in Zensys in the late 90s.

It runs on a mesh network, which is primarily used in home automation. The band frequencies range from 800 to 900 MHz. Z-Wave networks claim to support around 232 devices with four hops between devices.

The initial Z-Wave chipset was introduced in 2003 with consistent modifications to keep improving the performance in the future.

An enhanced version known as Z-Wave Plus was launched in 2013 in the form of a 500-chip series. Z-Wave obtained commercial attention in 2005 after the Z-Wave Alliance was established. Formation.

You can control devices on a Z-Wave network with the help of low-energy radio waves, which allow communication amongst these smart devices.

For this, you will need a central hub along with a Z-Wave hub. Before buying, you must consider the main features of Z-Wave and the pros and cons to anticipate the clear purpose of this protocol.

Insteon is a networking topology founded in 2005. It is associated with the Internet of Things and Home Automation and is a proprietary dual-band networking system, popularly known as Dual-Mesh network. It sends signals mainly through the following two ways:

The introduction of the Insteon protocol ecosystem has made networking of the devices together through a powerline or the radio quite convenient.

The communication is significantly more reliable than any other single-band network, and therefore there is no interruption for the signal to travel much further.

Insteon has introduced a dual-band mesh network that transmits control signals through the main powers in your house and proprietary wireless network.

Insteon devices act as a repeater when powered by mains to recast the messages concurrently so that it reaches up to the farthest locations of your house.

On the contrary, the mesh network in Z-Wave relies on wireless channels only for transmitting signals. It comprehends the status of all the connected devices and adapts to enable efficient routing of signals and preventing dead spots.

There might be some competition on the Z-Wave, but there is none on the Insteon. Some smart devices are available on Z-Wave but not Insteon, such as door locks, water valves shut off, sirens, etc.

While some smart devices are available on Insteon, they are not available on Z-Wave, such as sprinkler controllers.

A major concern with the selection of Z-Wave devices in the market is that most of its controllers have not been implemented or have not gone through any testing, so sometimes they experience some lags while operating.

In one of our articles, Best Z-Wave Controllers 2021, we have tested some of the top-rated controllers for Z-Wave and shared our experiences in detail. For an alternative, the Insteon KeypadLinc is comparatively easier to operate and quite reliable too.

Hence there’s no need for wiring during installation. Each device has a distinct ID for joining the network automatically once powered, so they don’t need to be enrolled.

Z-Wave, on the other hand, is quite forthright to install. While the devices can be installed into the existing mains, they will still need to be enrolled in the Z-Wave network by pushing a button on the product for the device to be accepted by the Z-Wave network controller.

This is an additional step as compared to the former. Still, it’s very easy.

Insteon devices respond without any lags or lapses at the maximum 38Kbps data rate of the wireless network. The messages take around 0.05 seconds to reach their final destination.

On the contrary, Z-Wave features a slower rate of 9.6 Kbps. Still, the speedy performance of connected devices is not affected by this.

Insteon devices follow peer-to-peer routing, as they act as peers, which implies that any can act as a receiver, responder., repeater, controller, or sender. This makes the routing quite convenient.

Unlike the mains-activated, battery-powered devices do not act as repeaters which saves battery life.

Z-Wave smart devices do act as controllers and routing slaves, which can repeat messages. They follow the network for specific routing via predetermined ‘Routing Tables,’ making routing quite complex, precisely in larger networks.

Insteon devices are resilient to overhearing and external control due to their distinct ID. Moreover, they feature AES-256 of the encryption standard for the highest security.

Z-Wave devices, too, have unique network IDs with similar security characteristics to Insteon.

Z-Wave vs Insteon: Discussing the Benefits

Z-Wave vs Insteon: Similarities Applicable to Both the Protocols

The very first commonality is that both protocols use AES-256 networking security for the protection of the user. There have been no reports of any severe interference in either of them.

All the devices and hubs introduced by either of the protocols are well equipped with firmware updates for newer products.

For instance, the latest hub update by Insteon has added better supporting ability with Sonos. This ensures the Insteon hub and the Sonos will be well supported in the future.

There are intriguing user communities in both the products capable of hacking, tweaking, or modifying tools and codes for better functionality.

Z-Wave and Insteon Together

We have observed many questions regarding the combined usage of both devices instead of looking for Z-Wave vs Insteon.

After testing both ourselves, we are sure that they can be used very well together. Both the protocols operate on different frequencies, which prevent all kinds of interferences with each other. X10 and X10RF can also be used at the same time.

To use both protocols together, you need a free USB port to plug in the Z-Wave interface.

You will need an interface to plug into the smart device, just like X10 and Insteon. This will enable communication between Indigo and the Z-Wave network. From the viewpoint of Indigo, regardless of the protocols, these are just devices.

How is it Good?

Indigo lets you integrate devices of each protocol much more easily and seamlessly.

Let a button turn any devices such as Insteon, X10, or Z-Wave on/off on an Insteon KeypadLinc. Trigger any action in Indigo and control an Insteon device with a Z-Wave motion sensor.

One of the major benefits of Indigo is that it lets you tie different types of devices across other protocols into a single consolidated manageable whole. Some protocols might be deficient, like Z-Wave doesn’t have its sprinklers, but you can still mix-n-match.

Z-Wave vs Insteon both devices have some practical restrictions on the types of devices in one single network.

Z-Wave has some of the best smart devices, such as security sensors, thermostats, door locks, and other smart devices that transmit data out.

To use both the technologies together, the protocol is that you circumvent the issues with larger networks. You can have multiple devices and create a reliable system by distributing the devices between the two protocols.

Z-Wave vs Insteon: Which One Should You Pick?

Insteon does have an edge when it comes to its robust dual-mesh network.

The dual-mesh technology, recast mechanism, and simple installation by Insteon offer you a robust network with multiple communication sources, advantageous for larger networks.

Nevertheless, these benefits are visible in moderate systems with less than 100 smart wireless devices within 2,000 m2.

Z-Wave, in such cases, is more promising as you don’t have many repeaters to facilitate maintaining easy routing tables.

A home automation enthusiast will firstly consider the range of products the protocol offers to meet his expectations. Here is where Z-Wave triumphs with greater varieties of heating, power, lighting, security, and more.

Z-Wave handles signal collisions more efficiently than Insteon, i.e., when several devices attempt to establish a communication simultaneously. Z-Wave offers a much wider variety of devices to choose from.

Also, the variety and quality of the conventional lighting controls have substantially been updated. Hence, we will recommend Z-Wave for all of our users.

Insteon is still on the plus side with its fan, sprinkler, and scene controllers. The direct link feature of Insteon devices is beneficial in scenarios like linking door sensors to the lights directly.

We hope that with this information, you will be able to reach a conclusion for Z-Wave vs Insteon.