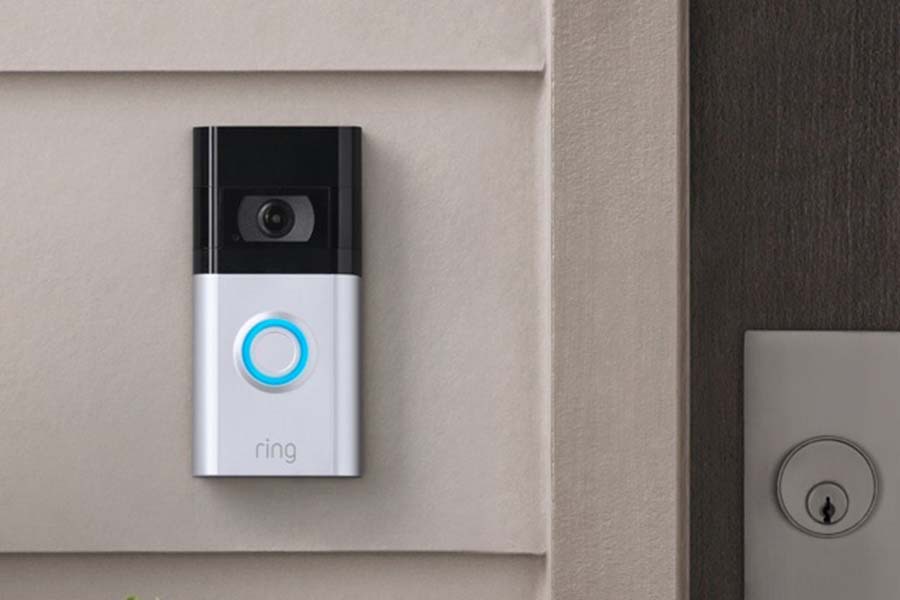 Step 1: Switch off the electricity.

Step 3: Take the doorbell from the wall.

You could always set up a battery-powered doorbell if you don’t wish to deal with the doorbell wiring system. The approach will be more straightforward altogether, with the only slowdown occurring during recharge intervals.

You may easily control downtime by arranging recharge intervals. For example, a battery-powered Ring doorbell may be more trustworthy if you already have regular power outages.

You’ll need to remove the doorbell or place it on the wall to power it. The battery can then be recharged by plugging it into a charger. Now let us look at how to remove Ring Doorbell out of the mount.

How To Remove Ring Doorbell?

In earlier models of the Ring doorbell, the batteries were not replaceable. Therefore you had to dismantle the entire doorbell from the wall mount to recharge it.

Generally, you should have little issue detaching the doorbell from the mount, as well as the overall process might only take a couple of moments.

Begin by removing the fasteners on the base of the doorbell with a star-headed screwdriver. When you just purchased the doorbell, and the mount is attached, the screws may not be connected yet.

Anyway, after detaching the screws from the base of the doorbell, you can simply lift the doorbell off in a smooth motion.

You do not have to use much effort, and the doorbell would immediately come off the mount when you hold it up and out from the frame.

You may charge the doorbell with a USB cord after detaching it. Then, whenever the LED indication on the doorbell indicates that the battery is entirely charged, replace the doorbell on the mount, and your task is over.

To disconnect the Ring doorbell of the mount, avoid using any sharp instruments. Metallic devices, in particular, might irreparably harm the doorbell, necessitating the purchase of a new unit.

Several customers reported that gently scraping the sides of the bracket with a plastic tool assisted them in detaching it from the doorbell.

To recharge the battery in the latest generation, you do not need to remove the entire doorbell. Instead, simply disconnect the doorbell’s faceplate and batteries. After charging the battery, replace it with the doorbell.

To sum it up

By releasing the bolts on the base of the doorbell and pushing it upwards from the mount, the Ring doorbell may be simply disconnected from the frame. And that is all you need to do, and you shouldn’t have to apply any effort.

Using metallic tools to cut the doorbell off the bracket may cause damage to the device, requiring you to purchase a new one.

Therefore, if you’re experiencing problems detaching the doorbell of the bracket, contacting Ring customer service is the best option.

How To Remove Ring Doorbell Without Tools?

If you don’t have a tool, carefully shake the ring doorbell with a blunt surface.

Consider a no-drill mounting, double-sided tapes, or perhaps even adhesive strips if you just want to remove the Ring doorbell without the need for a tool on a frequent basis.

Using a Dull-Edged Object, carefully lift the gadget away from the wall.

Suppose you used one of these to mount this gadget; the unmounting procedure can be a little complicated. It’s important not to grip the gadget and tug, whether you’ve used tape or Adhesive strips.

Use a blunt tool as a lever to carefully remove the ring gadget off the wall while uninstalling it. If this process is not followed correctly, your gadget may be damaged, or the wall may become dusty.

If you’ve misplaced your original ring screwdriver, get a replacement.

Suppose you installed the gadget the traditional way. In that case, the removal procedure is loosening the security screw with the tool that came with the gadget and thereafter gently pulling the gadget away from the wall.

If you misplaced your original Ring screwdriver, you may certainly order a replacement by notifying Ring customer service.

Because the Ring screwdriver is a Mini Torx, it is rather readily accessible on the internet or in any equipment nearby store you if you consider that procuring the screwdriver via customer care would be too lengthy.

To quickly dismantle the Ring doorbell, consider mounting it using uncommon yet innovative means. After moving around a lot, here are some things I’ve tried, tested, and now suggest.

These methods involve Adhesive, double-sided tapes, or other simple devices that help you install or detach the gadget properly and swiftly.

Install the Ring Gadget Without Using the Mounting Bracket

When trying to mount the Ring doorbell, first attempt double-sided adhesive. It’s a rather easy method that anybody can master.

Remove the cover from one edge of the tape and secure it to the rear of the doorbell. When everything is in place, remove the lid from the other end of the tape.

Attach the doorbell to the wall, and you’re done. Make sure the tape you’re using is sufficient to prevent it from slipping off. However, take care not to ruin the wall it was fastened to while disconnecting it.

For Ring Video Doorbells, make use of the No-Drill Ring Mount (2nd Gen)

The No-drill Ring mount is an excellent option if you don’t intend to place glue straight on the Ring gadget.

The No-Drill Ring Mount is a drill-free design, but it still requires a screwdriver to install. It has one side with an adhesive-based mounting that is wall-facing and the other side with standard safety fasteners for fixing the ring gadget.

Attach the Ring Doorbell to the wall with adhesive strips.

If, like me, you’re concerned about the damage on the doorbell, you might consider mounting the Ring doorbell to the wall with adhesive patches.

Then, simply adhere one part of the Adhesive strip pair to the wall and the other from the back of the Ring gadget.

This is a handy and practical way to install it, and it ensures that no surfaces are harmed.

The main disadvantage of utilizing Adhesive strips is that even when you move, you would have to either leave one side of the adhesive strips behind or then attempt to scrape them off.

The Ring Doorbell is a useful security feature for any house. In addition, its ability to be both battery-powered and corded gives it an extremely versatile power source.

Whenever the Ring gadget is on batteries, it normally lasts between 6 and 12 months, depending on how often you move. To change the batteries, you must first unmount the gadget.

The traditional way of unmounting can be time-consuming; therefore, attempting some of the above-mentioned solutions may show to be a real-time and work lifesaver in the long term.

This type of mounting also allows for easier access to the item for cleanup, troubleshooting, and upkeep.

To remove a ring doorbell, what sort of tool can I use?

You’ll need a ‘Tamper-Proof T15′ screwdriver to remove the Ring doorbell, often known as a ‘Tamper-proof Star’ drive. It is readily identifiable by the groove at the tip in which the screw head attaches.

What is the proper way to remove a Torx screw?

There are several methods for unscrewing a Torx screw, the most basic of which is to use a Torx screwdriver; if you may not have a screwdriver, you could try a bread knife or a penny.

What is the best way to remove the cover from a Ring Pro Doorbell?

Remove the screw from the faceplate’s bottom.

With two thumbs, press up from the base of the cover until the cover comes loose.

Again when the faceplate is loosened, push it away from the surface and detach it.

Which Ring Doorbell has a battery that can be removed?

A rechargeable lithium-ion battery is included with the Ring Doorbell 1, 2, 3, and 4. The Doorbell Pro and Ring Elite, on the other hand, are hardwired.