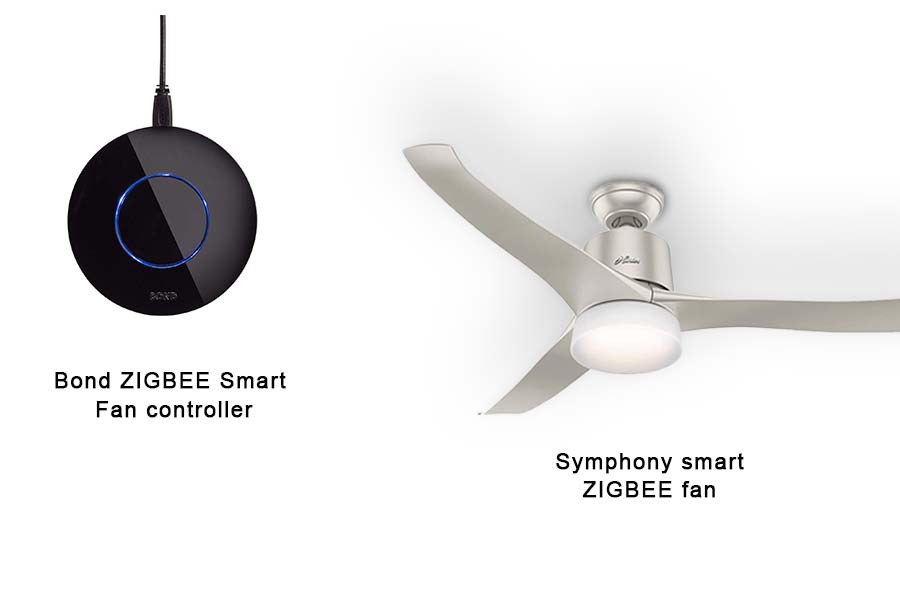 Having to physically reach back and switch the plug for a ceiling fan is as inconvenient as having to lift the garage door physically.

Therefore, if you’re anything like that and obsessed with all things smart home, you’ll undoubtedly want to incorporate smart control into just about every fan in your home.

Get a new ZigBee fan controller

Setting up a new smart fan is the best choice if you want a fan that connects with your existing smart home system.

WiFi or Zigbee smart fans are the most common. You won’t require a hub if you use a WiFi fan, such as those made by Hunter or Haiku.

A normal Infrared (IR) remote control is still included and accessed via a smartphone app.

WiFi fans often have Alexa and Google Assistant connectivity and voice-activated integrated lighting and the fan. On your smartphone, you’ll now have to install a dedicated app.

Furthermore, if you have several WiFi gadgets on your network, you encounter the problem of interference.

Fans of ZigBee, on the other hand, will need to invest in a smart hub. The most common options, from Gardiner and Hampton Bay, are particularly built for Wink hubs.

If you have numerous ZigBee home automation gadgets, they will work together to establish a mesh network with the ZigBee fan to improve range.

However, while they do feature Alexa and Google Assistant connectivity, this generally does not enable voice recognition of the fan—the virtual assistants can only switch the incorporated light in and out.

If you’ve already equipped a fan with an IR remote, the method for mounting a smart fan would be the same.

Once you install the fan, you wire in an IR module that also incorporates WiFi or ZigBee radios.

ZigBee applications may be utilized in simple household gadgets and appliances. For example, a fan controller is a popular usage of ZigBee.

Therefore, you may operate your fan via your smartphone using the fan controller ZigBee.

But also consider, ZigBee is merely a short-range communications protocol. In this scenario, the protocols to communicate with the fans will be used by your device.

As a consequence, all fans in your home may be controlled remotely via your smartphone.

You will now have total control across all of the fans in your home. You may adjust the setting of the fan with a simple tap. For instance, switch on and off the lights.

You may also modify the speed at which they run using your smartphone. In addition, the ZigBee fan controller allows you to perform more simple activities with your fan.

Using ZigBee, you may control fans from your smartphone.

It is critical to have a smart fan instead of a regular fan if you want to manage it with your smartphone.

Alternatively, you can use an IR module and perhaps adapters to convert your standard current fan into a smart fan. We would, however, advocate utilizing a regular smart fan for the best results.

A smart fan may be controlled through a smartphone in two ways. The first is over WiFi, while the second is via ZigBee.

The fan must be handled via ZigBee, which necessitates the use of a smart hub. You should also be able to monitor the fans using an application on your smartphone.

Each smart fan is equipped with a standard IR that also enables users to access it entirely from their smartphones.

Perhaps the only task that you must do is to wire an IR module with ZigBee radios while mounting the smart fan. 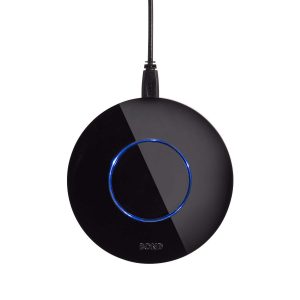 The Bond controller is a smart home automation gadget from the United States-based firm Olibra that was designed to provide a simple method to ‘smarten up’ your previously installed ceiling fans so that you can monitor and manage them over your home WiFi network, and it supports up to five fans.

This gadget does necessitate you to get a ceiling fan with a controller. Still, on the plus side, it works with just about all existing fans and is interoperable with remote controls which use either (or both) the IR blaster or the RF technology. 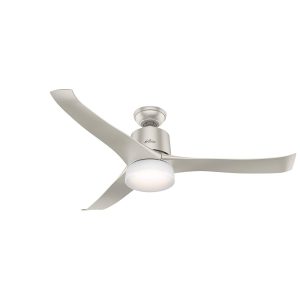 While certain smart ceiling fans and smart controllers are functional with the most famous smart home hubs (including SmartThings, Wink, Google Home, and the Echo Dot), we observed that there are not nearly as many HomeKit-compatible smart wall switches.

Luckily, Hunter has considered customers who want to construct their smart home around the whole Apple HomeKit hub and has developed a line of smart ceiling fans which can be utilized inside the HomeKit ecosystem.

The Hunter Symphony ceiling fan is a cost-effective option that, in addition to being totally compatible with HomeKit, also interacts with Amazon Alexa. 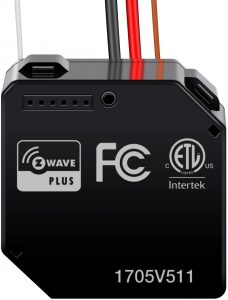 It’s a Z-WAVE relay switch module that adds Z-WAVE connection functionality to existent switches in your house, permitting you to operate fans, lights, or any other single appliance using a mobile app (iOS or Android OS) or a web browser.

We’ve seen a significant shift within the last handful of years toward the reduction of a huge proportion of Z-WAVE or ZigBee hubs, indicating that manufacturers (and customers) would want a cloud-based connection for their IoT devices (via Bluetooth or WiFi) rather than localized automation – a so-called “smart home.”

The relay’s appearance isn’t important, but its size is, so its dimensions of 1.77 x 1.65 x 0.72 inches are a major plus, enabling it to be put next to nearly any sort of power switch.

The setup process is not difficult, but if you are unsure (or lack the information) about making changes to your home’s electrical system, you should hire an electrician.

However, WiFi solutions for managing smart supporters are also available, and many choose to utilize ZigBee. The strategy to short-range communication and meshing networking is easier and cheaper.